In the spirit of Halloween, for the last month, my robotics team, 2877 LigerBots, and I have been working on a pumpkin smashing guillotine. Designed to mitigate the amount of carved pumpkins going into land fills, Smash-O'-Tine obliterates, destroys, and gruesomely beheads pumpkins all whilst in front of city hall. Oh could Robespierre see us now!

Standing at a towering 8ft, and demolishing pumpkins with a 60 pound crate, Smash-O'-Tine made easy work of pumpkins during Pumpkin Fest. In fact, it was so amusing to watch that we had a waiting line from one side of city hall to the other. People really wanted their pumpkins to be squashed!

Note: Smash-O'-Tine is the amalgamation of the words Guillotine, Smash, and Hall-O'-Ween.

Having accomplished this, we started out with fairly simple design constraints. We wanted a device that could:

When brainstorming, we instantly came up with the idea of a guillotine. It would be a straightforward design, easily recognizable by the crowd, and a glorious site in front of city hall.

Smash-O'-Tine can be broken down into four basic components:

At the heart of Smash-O'-Tine is the smashing head. Consisting of 12, 5lb, bricks situated inside compartments made out of 2x4's, the idea was that the crate would slide up and down along two guide rails with two metal poles that go through the middle.

With the Smashing Head sliding up and down the rails, the structure of Smash-O'-Tine was basically these two guide rails.

Consisting of 4, 8 foot long, 2x4's, they were attached together with a plywood strip along the side. Supports for front-back and left-right movement were added to prevent rocking.

By far the most crucial, and frankly mind numbing, component of Smash-O'-Tine was the release system. We came up with multiple mechanisms, from a pin that would be pulled out, to a electrical actuator that the crate would rest on, to eventually our final idea, a winch and a falling trigger arm.

The beauty of a winch is that, it basically solves the issue of lifting and releasing all into one convenient, easily sourceable, package. It allows for effortless lifting of the crate with its immense mechanical advantage (these things can pull out cars from ditches!) and creates an easy way to release the smash head through the unlatching of the winch's ratchet arm.

However, though the benefits were clearly seeable by me, my coaches and teammates were hesitant in employing a winch. They feared that the friction force required to bring down the rachet arm under load, coupled with the concern that it would be difficult to unwind a winch.

A bit of explaining, arguing, and prototyping was necessary to get them on my side 🤪. In the end though, the winch worked out perfectly and everyone was happy.

With the winch in place, all that needs to be done now is to trigger the smashing head.

One requirement that we decided on early on was that our 2020 FRC robot, Dave, must be able to trigger the Smash-O'-Tine; thus, we had to have some target that a dodge ball could be thrown at. This led me to coming up with a falling trigger arm that would unlatch the brake arm of the winch in the release mechanism. While my idea was most definitely sketchy, it worked great! 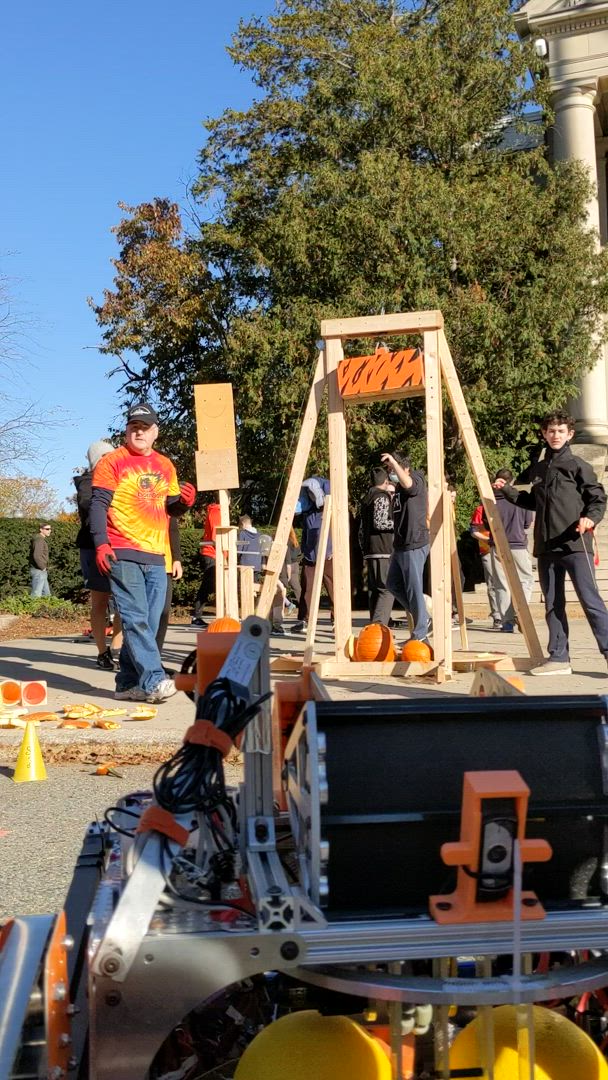 And look at all the 🎃's we smashed! 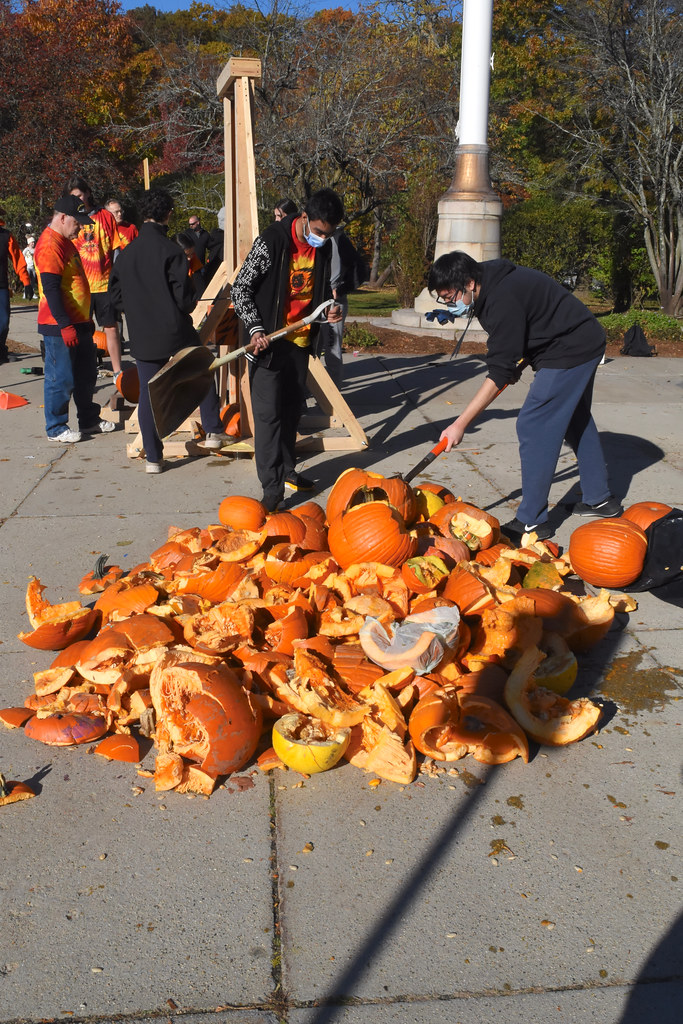 All in all, Smash-O'-Tine was a smashing success! It was so exciting seeing everyone line up in front of the guillotine and watching the Smashing Head consistently smash, pulverize, and obliterate pumpkins.

Smash-O'-Tine was created on an extremely tight timeline, in fact we had just 5 hours of shop time and only 3 weeks to design, prototype, and ship. I still vividly remember us staying late into the night one meeting finishing up the structure. We were busy cutting wood, screwing things together, and finding a way to transport the massive structure to city hall. We were still building stuff two hours before show time!

Despite this, everyone persevered and we finished with just a few minutes to spare. I suppose the rest is history.